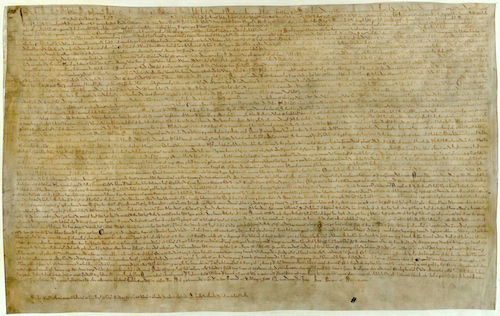 Magna Carta (1215) is a document that restricted the power of the king of England. Written and forced into law by rebellious barons, it established that no one was above the law, not even the king. Before this, medieval English royalty held absolute power.

By 1213, barons and Church leaders had come to view King John as being greedy and power-hungry. In 1215, a large group of barons mutinied, capturing London with their armies. The King was forced to accept Magna Carta to gain peace. But King John soon refused to abide by Magna Carta so a civil war raged. In 1225, King Henry III agreed to a rewritten Magna Carta in exchange for a massive tax and an end to the unrest.

Even though Magna Carta only affected the elite at the time, its clauses put unprecedented restrictions on the king, and its check on monarchy was an important stepping stone toward modern democracy and constitutions.

Pages on the Magna Carta at Enchanted Learning