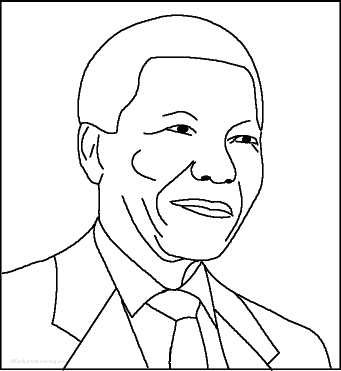 Nelson Mandela was a great leader who spent his entire adult life working for equality and justice in South Africa. Mandela has inspired people around the world to work non-violently for a better life. Mandela is affectionately known by his clan name "Madiba," or by "Tata", which means "father."

Mandela was born on January 18, 1918, in Mvezo, Transkei, in the southeast of South Africa. He was named Rolihlahla, which means "troublemaker" in the Xhosa language. Mandela's grandfather was the ruler of the Thembu people and his father was a local chief.

Mandela was the first person in his family to attend school (both of his parents were illiterate). On the first day of school, a teacher at the Methodist mission school, Miss Mdingane, re-named him Nelson. Nelson did well in school and went on to graduate from college and attend law school at University of the Witwatersrand (Mandela was the only black African student in his class). Mandela once said, "Education is the most powerful weapon which you can use to change the world."

By 1942, Mandela was involved in political causes. He began attending meetings of the African National Congress (ANC), a revolutionary group whose aim was to fight apartheid (laws establishing racial separation and oppression in South Africa).

Mandela helped found the African National Congress Youth League (ANCYL) in 1944. He organized boycotts and strikes to fight for voting rights and equality for black South Africans. In 1944, he married Evelyn Ntoko Mase (they had 4 children).

In 1956, Mandela and over 100 associates of his, were arrested for treason. They were all later acquitted. Mandela divorced Evelyn in 1958, then married Nomzamo Winnie Madikizela (with whom he had 2 children).

The ANC was banned in South Africa in 1960. In 1964, Mandala was sentenced to life in prison for fighting apartheid. After spending 27 years in prison, Mandela was released in 1990. Upon his release, Mandela worked to repeal apartheid and stop the growing violence in South Africa. He also helped establish multiracial elections which would occur in 1994. For his work, Mandela won the Nobel Peace Prize in 1993 (he shared the prize with with F. W. de Klerk, who was then the President of South Africa).

In 1994, South Africa held its first truly democratic, non-racial election and chose Nelson Mandela as its president. Mandela championed reconciliation, the peaceful resolution of grievances after decades of repressive laws against black South Africans. Without Mandela's guidance, South Africa might have lapsed into a bloody civil war.

Mandela published his autobiography, "Long Walk to Freedom," in 1994. The Truth and Reconciliation Commission was formed in 1995 (it was chaired by Archbishop Desmond Tutu). The Commission was a court-like organization that was formed in order to document the attrocities that the Afrikan apartheid police state had perpetrated against black people, and thus begin to heal the rift that had formed between the races in South Africa and avoid a civil war.

Freedom Day, celebrated on April 27 each year, commemorates the anniversary of South Africa's first real democratic elections (in which Mandela was elected president).

Mandela served as President of South Africa until 1999 (he refused a second term). On his 80th birthday, he married Graça Machel (he had divorced Winnie in 1996). His second book, "Conversations with Myself," was published in 2010.

Nelson Mandela died on December 5, 2013, at the age of 95. He died of natural causes after a long illness. He will be remembered as one of the greatest peace-makers and statesmen of all time.

Enchanted Learning®
Over 35,000 Web Pages
Sample Pages for Prospective Subscribers, or click below