ANATOMY
Coelophysis (pronounced SEE-low-FIE-sis) was a small, lightly-built dinosaur that walked on two long legs. This predator was about 9 feet long (2.8 m). It had light, hollow bones (hence its name), a long, pointed head with dozens of small, serrated teeth, three clawed fingers on its hands, and a long neck.

Two types of Coelophysis fossils have been found, 'robust' and 'gracile.' These two forms probably represent males and females. 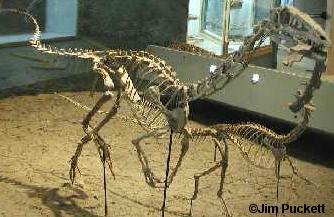 Photo of Coelophysis bauri, taken by Jim Puckett in the Dinosaur Hall of "Prehistoric Journey" at the Denver Museum of Nature and Science.

WHEN COELOPHYSIS LIVED, CLIMATE
Coelophysis lived during the late Triassic period, roughly 210 million years ago; it was one of the earliest-known dinosaurs. Coelophysis lived in what was then a seasonally dry, desert-like environment, a savanna-type climate perhaps like modern-day Kenya without the grasses (since flowering plants hadn't evolved yet).

DIET
Coelophysis was a carnivore, a meat eater. It may also have been a scavenger. Coelophysis' fossilized stomach remains have been found containing small reptiles, fish, and other Coelophysis bones of different sizes, indicating that it was a cannibal.

BEHAVIOR
Coelophysis probably lived and hunted in packs; this is suggested by the existence of fossil bonebeds of hundreds of Coelophysis (collections of many fossils at one location) found at the Ghost Ranch in New Mexico, USA.

LOCOMOTION
Slightly built, long-legged, and very light because of its hollow bones, Coelophysis was a very fast, bipedal runner. Dinosaur speeds are estimated using their morphology (characteristics like leg length and estimated body mass) and fossilized trackways. Coelophysis tracks have been found; the footprint is 4 inches long and the stride length is 2.5 ft (0.75 m).

DISCOVERY OF FOSSILS AND NAMING THEM
Coelophysis was discovered in 1881 by David Baldwin. It was named by US paleontologist Edward Drinker Cope in 1889. The type species is Coelophysis bauri (named by Cope and Colbert in 1964). There is some confusion about the naming of this genus arising from the fragmentary nature of the type specimen.

Thousands of Coelophysis fossils, including bonebeds (collections of many fossils of the same species in one location), have been found at Ghost Ranch, New Mexico, USA (these dinosaurs were called Rioarribasaurus at one time, but this name was later dropped). Several hundred Coelophysis fossil skeletons have been found in Arizona, New Mexico, and perhaps Utah. Both adults and juveniles have been found. There are two types of adults, "robust" and "gracile" - these two morphs may represent males and females.

CLASSIFICATION
Coelophysis was a saurischian ("lizard-hipped") dinosaur, and a theropod. Its further classification is disputed, but it may be a ceratosaurian. It is closely related to Rioarribasaurus (or may be the same genus; the name Rioarribasaurus has been discarded).


Just click on an animal's name to go to that information sheet. If the dinosaur you're interested in isn't here, check the Dinosaur Dictionary or the list of Dinosaur Genera. Names with an asterisk (*) were not dinosaurs.
How to write a great dinosaur report.
For dinosaur printouts, click here.

Enchanted Learning®
Over 35,000 Web Pages
Sample Pages for Prospective Subscribers, or click below