The Space Race was a part of the Cold War, with the United States and the Soviet Union (the USSR) vying for firsts in outer space. They competed to launch the first satellite, have the first person in orbit, and land the first people on the Moon! Think about that: this was an international race of gravity-defying exploration. This late 1950s-through-1960s extraterrestrial rivalry had twists at every turn, where each side tried to show that it was the more powerful and technologically advanced nation. Yet the lasting legacy of the Space Race is of exploration, of gazing at the stars and yearning to touch them, and then making the first leaps off our planet. This was a launch upwards–a revolutionary step forward for mankind.

The USA and USSR had been on the same side in World War II, which ended in 1945. The war left much of Europe and Asia in turmoil, and the USA and USSR found themselves as antagonistic superpowers (incredibly powerful nations, with more sheer might than any other country at the time). The USA celebrated democracy and capitalism while the USSR was communist, and both nations sought to spread their ideology and influence over the rest of the world. All-out war wasn’t declared (thus the “Cold” War) but tensions were high. It was uncertain whether the rocket scientists would be making military or scientific creations…and then the Space Age began with a thunderous starting bell.

On October 4, 1957, the Soviets announced that they had just launched the first manmade satellite into space. This Sputnik 1 (Sputnik in Russian means traveler) was the first artificial object to orbit the Earth! The Soviet government had kept the project highly secret, even keeping the name of the Chief Designer (Sergei Korolev) unknown for years.

The American public were shocked they’d been beaten into space. The USA soon after (January 31, 1958) sent Explorer 1, its own satellite, into orbit. It was only in October 1958 that the USA founded the National Aeronautics and Space Administration (NASA), which was a massive expansion of the earlier National Advisory Committee for Aeronautics (NACA). Leading the fray in America was the US Navy and the highly controversial Wernher von Braun, who had worked for Germany in World War II. Founding NASA was the first time America put its national weight behind space innovation.

Still, the Soviets had a large head start. A month after the successful Sputnik satellite they launched Sputnik 2 with a dog named Laika, the first animal to orbit Earth. The US had already been experimenting with putting monkeys in space (including Albert II who in 1949 had become the first mammal in space, on a suborbital flight). But the USSR’s dogs, Tsygan and Dezik, in 1951 became the first mammals to go into space and survive to return safely to Earth.

Why was it difficult to explore space? It took a huge amount of power to propel a rocket past the atmosphere. The USSR even attached multiple engines to their rockets (though this was very risky and sometimes resulted in an explosion). The countries also needed to manufacture heat shields to protect both the rocket and the beings inside. Then they had to figure out how to deal with weightlessness and how to store the needed machinery in such a small place. When you added animals and then human passengers to the mix, the engineers had to invent a way to keep air in the capsule and a way to safely return to Earth! It was a crazy prospect to get a satellite into space–let alone sending a man to the Moon.

The public viewed the USSR as being far ahead of the USA, but this wasn’t quite the case. America’s launches were publicized so all their failures were well-known. The USSR kept everything a secret and only announced their successes. Even today, much of the Soviet’s early space age is shrouded in mystery. It’s uncertain how many rockets they went through and how many casualties occurred from fires, explosions, and crashes. It’s likely that the Americans were slower because they double-checked safety mechanisms by having more test flights. The USSR was less concerned about safety, taking problematic risks the Americans weren’t comfortable with.

The US Roadmap to the Moon

NASA’s plan for a manned landing on the Moon was divided into three phases:

On April 12, 1961, cosmonaut Yuri Gagarin became the first person in space AND the first person to orbit the Earth (in the spacecraft Vostok I)! Alan Shepard shortly followed Gagarin in Freedom 7 on May 5, 1961, becoming the first American in space! Shepard’s flight was 15 minutes long, a suborbital flight much shorter than Gagarin’s hour and a half. On February 20, 1962, John Glenn (in Friendship 7) became the first American to orbit the Earth. The Soviets achieved the first spacewalk on March 18, 1965, with cosmonaut Alexey Leonov; the American astronaut Edward White, Jr., matched this achievement on June 3, 1965. Look at how close all these dates were! The USSR and the USA were neck and neck, with the Soviets coming out just ahead for a time. This is a long list of firsts—but it was an extraordinary time.

As a follow-up to Project Mercury, NASA began Project Gemini, the second phase of the US manned space program, with great fanfare. Gemini took on more scientific research, experimented with docking in space, tested how humans would be affected by space flight, and succeeded in making spacecraft big enough for more than one person. The Apollo program that would eventually reach the moon began in tandem with Gemini, with Gemini developing skills and techniques needed for Apollo. Unlike the USSR, NASA kept to a rapid schedule with new flights every few months.

One interesting difference between the American and the Soviet flights is that the US space capsules returned to Earth by splashing down in the ocean, whereas the USSR decided on the trickier (and riskier) procedure of touching down on land.

To the Moon or Bust

NASA’s Project Apollo had the Moon in its sight! The USA was keen to at last beat the USSR. In 1961 President John F. Kennedy had proposed the “goal… of landing a man on the Moon and returning him safely to Earth” before the 1960s were over. A Moon landing was no easy task. Project Apollo in total cost over $25 billion and included around 400,000 employees (34,000 in NASA itself). It only took a little over eight years after Kennedy’s speech to achieve a manned lunar landing! Throughout, both sides suffered tremendous setbacks. In early 1966, the USSR started cutting back their space program. This happened partly because they lost their Chief Designer: Sergei Korolev died, and some think their space program died with him. It’s been argued that Korolev’s vision was the reason Sputnik had been launched and why the USSR cared about outer space. Without him, their passion dwindled.

In the USA a year later (January 1967), a launch test-run ended in a fire that killed three astronauts. This was the first disaster to strike the American side and deeply shook resolve. Still, while the USSR became reluctant to give their space program more funds, NASA became even more determined. Winter 1968 saw the Americans’ first manned orbit around the Moon, in Apollo 8. These astronauts were the first humans to ever see the far side of the moon (the side that never faces the Earth, due to the tidal lock on the Moon’s rotation)!

“The Eagle Has Landed.” 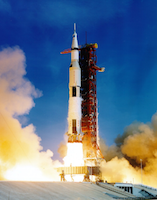 On July 20, 1969, people the world over gathered around televisions, four days after the launch of Apollo 11. All news stations were on standby for video out of NASA. Michael Collins manned the Apollo 11 capsule orbiting the Moon, while fellow astronauts Neil Armstrong and Edwin “Buzz” Aldrin Jr. had taken Eagle, the smaller Lunar Module, from the Apollo 11 command module down towards the Moon’s surface. Collins, NASA, and the world waited with bated breath to see if Armstrong and Aldrin would safely make it to another world. When the live video feed of the Moon did come through, it was grainy and incredible. Mission Control at NASA was relieved when Armstrong radioed in that they’d landed on the Moon safely. NASA transmitted back: “You got a bunch of guys about to turn blue. We’re breathing again. Thanks a lot.”

Imagine a hushed world staring at their television screens at the grey, foreign landscape of the Moon’s Sea of Tranquility (which, in spite of its name, isn’t actually a sea). Then came the blurred image of Neil Armstrong slowly hopping off the Lunar Module onto the Moon with his left foot first. The volume was muffled as he spoke the words: “That’s one small step for [a] man, one giant leap for mankind.”

Around twenty minutes later Aldrin joined him, becoming the second man to walk on the Moon. They collected samples of soil and rocks, set an American flag in the ground, had a telephone call with then-President Richard Nixon, and left their footprints. When Armstrong and Aldrin left the Moon, they’d been on the surface for nearly a day.

The success of Apollo 11 marked the end of the Space Race. The USSR acknowledged the Americans’ victory in getting to the Moon, the Cold War continued to simmer (though grew cooler), and the world moved on. Satellites–once as modest as Sputnik–were launched in hordes and became essential to modern life. These satellites allowed for GPS and for easier and faster global communication and other innovation. The inventions from the Space Race propelled humanity forward, including aiding in the advent of the Internet.

NASA wasn’t done; 1975 saw the firm close of the Space Race as the Americans and the Soviets worked together to launch the Apollo-Soyuz Test Project (ASTP). Soyuz means Union in Russian. Astronauts and cosmonauts were able to lock their ships in mid-space, meet each other, and perform joint scientific experiments!

Yet, the world was introduced to space travel as merely a competition. Once the Moon was reached and the USA had “won”, people began asking, “What’s the point of space?” NASA’s funding spiralled down. Plans for Moon missions were put on hold, while thoughts of lunar colonies and Mars exploration were discarded. The tragedies of the Challenger and Columbia space shuttles made the public even more wary. By the early 2000s, space exploration was almost seen as frivolous.

Thankfully, a modern Space Age was on the horizon. Check it out in our next section — it’s coming soon!