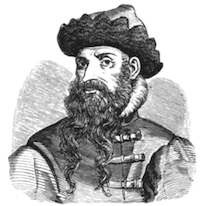 Johannes Gutenberg (1390s-1468) was the German inventor of the printing press and publisher of the Gutenberg Bible (or the 42-line Bible). Using metal movable type he revolutionized the world by introducing the mass production of books to Europe.

Before this point, writing was replicated by painstakingly copying from one page to another, often entirely by hand. Because of this, books were very expensive, so they had been relegated to the elite. Few people could read and write, and most of these were in the upper classes or the Church.

But Gutenberg’s printing press turned all of this on its head, making books much less expensive and causing a surge in literacy. The importance of this invention was so immense that it helped bring about the European Renaissance. By 1500, the printing press was being used in nearly 200 cities across Europe and had manufactured 20 million books.

Early Life and the Printing Press

Born in Mainz, Germany, as Johann Gensfleisch zur Laden zum Gutenberg, in his early life Gutenberg worked as a goldsmith, blacksmith, merchant, and bookmaker. In 1428, his family moved to Strassburg (today’s Strasbourg), which was where he started to work with printing and where he demonstrated the original printing press in 1440. His invention made use of movable type (small metal stamps — for example, one letter of the alphabet — which could be reused in different arrangements). Printing did exist before this, but people typically had to carve out entire pages on blocks of wood, which were then inked to be copied. Gutenberg’s process was much simpler.

Before Gutenberg, suppose you wanted to make a wooden carving of the sentence, “I like to ride my bicycle.” Once you’d completed the carving, you could use ink to stamp this phrase on as many pages as you’d like. But if you wanted to have a second sentence you’d have to make a brand new stamp. What Gutenberg did was make it so his stamps could be reused for different things. If he wanted to write out the same sentence as above, he’d separately fit out the letters “I”, “l”, “i”, “k”, “e”, etc. When he was done with this sentence, he could take the letters apart and easily use them to make a different sentence. Gutenberg could even print out 42 lines at a time.

All of this taken together made books easier to make, vastly cheaper, and more readily available.

Gutenberg returned to Mainz in 1448 where he opened a print shop. This was also when he went into business with his financial backer Johann Fust, as he needed money to buy printing equipment. But by 1452 it became clear that Gutenberg couldn’t repay Fust’s loan. Things became so bad that in 1455 Fust sued Gutenberg and took him to court for the lost funds. Interestingly, Gutenberg also completed printing the famous Gutenberg Bible (also called the 42-Line Bible or the Mazarin Bible) in 1455. The initial print run of this Bible was 180, which was astounding as it previously took nearly a year to produce a Bible, as every page had to be handwritten. This new rapid way of producing written material meant that it became possible for people outside of the clergy and the most elite classes to own a Bible — and soon other books too. (Gutenberg also printed poems, the book of Psalms, and other works during this time.)

Unfortunately, rather than being able to celebrate this groundbreaking work, Gutenberg lost his print shop (as well as his completed, printed books) to Fust due to the unpaid loan. Gutenberg may have continued to work in his former printing business for a time. But even this was not to last, as the shop was destroyed when Archbishop Adolph II invaded Mainz in 1462.

Gutenberg remained in his home town, impoverished at first. But he soon sustained a living through printing and, in 1465, from the funds provided by being given a title (of Hofmann). Very little is known about the rest of his life; it is thought he might have gone blind shortly before he died in 1468. He very likely continued printing, but he didn’t put his name on any later works.

Gutenberg’s printing press and its widespread adoption through Europe was astonishing. Printed books could be produced in a fraction of the time and money that it took to create handwritten books. Because of this, a Printing Revolution (or the Gutenberg Revolution) occurred. Printing presses swept through the West, written material swamped the market, and prices dropped drastically. Books remained a luxury, but they were no longer unobtainable items. As people in all ways of life began to have access to the written word, literacy rates soared.

Much of this early printing was focused on religious texts, and Bibles suddenly became affordable to families and individuals. This would lead to a loosening of the Catholic Church’s grip on Europe for, as Martin Luther would later trumpet in 1517, people began to interpret the Bible’s words for themselves. The Protestant Reformation supported translating the Bible into German (previously only available in Latin, which was mainly understood by those in the Church) so that religion could be read on a personal level and people didn’t have to solely rely on clerics’ explanations.

Beyond religion, the exchange of other ideas also became dramatically easier, and more knowledge was available to people than ever before. The Printing Revolution formed much of the foundation of the Renaissance and the Scientific Revolution. New freedom was seen in almost all facets of society, as literacy and an abundance of books meant that people no longer had to rely on others to interpret the world for them.