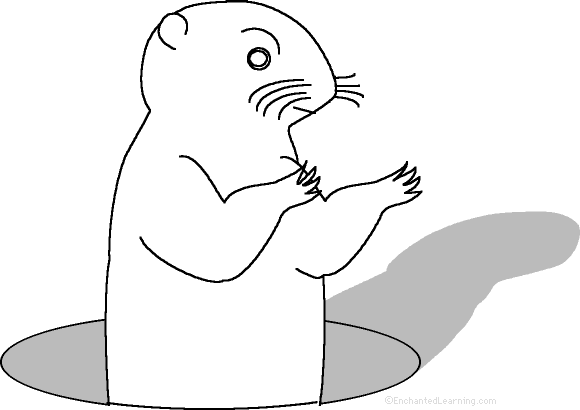 We love folklore and adorable animals. So we always look forward to Groundhog Day!

This holiday is a fun tradition that marks the transition from the snowy winter to the sunny spring. Each year on February 2nd, it’s said that if a groundhog/woodchuck comes out of its hole and doesn’t see his shadow: congrats! Spring’s just around the corner. If the groundhog does see his shadow, then you’re in for another six weeks of winter.

…To be clear, this is not serious!

The “most official groundhog” is Punxsutawney Phil, a cute little groundhog in Punxsutawney, Pennsylvania, USA.

The tradition of Phil the Groundhog began in 1887 — each year since, the photogenic groundhog has appeared on February 2nd (with or without his shadow). When Phil comes out of his burrow, he “tells” the President of the Punxsutawney Groundhog Club in “Groundhogese” whether or not spring’s around the corner. This official Groundhog Club has also given Phil a wonderful title: Punxsutawney Phil, Seer of Seers, Sage of Sages, Prognosticator of Prognosticators and Weather-Prophet Extraordinary. No, we aren’t joking. Yes, this is the best thing you’ve ever read.

Phil’s famous Canadian cousin is Wiarton Willie, who’s been “predicting” the weather since 1956 in Wiarton, near Toronto.

There are also many other Groundhog Day ceremonies across North America. Though Groundhog Day is largely viewed as an American holiday, it came from a Celtic festival called Imbolc (later, St. Brigid’s Day) celebrating the midpoint of winter and the coming spring. February 2nd is around the middle of the winter solstice and spring equinox (in the Northern Hemisphere). In the Southern Hemisphere, it’s between the summer solstice and the autumnal equinox.

Many cultures celebrate the coming of spring and the changing of seasons. This includes the Christian holiday Candlemas, with a tradition that seeing the sun meant the winter would last longer. This change in seasons was important, because it helped farmers judge determine they should plant their crops, as well as being a celebration of the return of warmer weather.

Badgers, Bears, and Groundhogs — Oh My!

Why groundhogs? Back in the day (starting in the Middle Ages), northern Europeans thought that some animals awoke from their hibernation in early February to check on the weather and if they should go back to sleep. Bears or badgers were the animals that Northern Europeans would look to, to judge when the seasons would change. Later on, early German immigrants to North America found a distinct lack of badgers (and were likely wary of approaching bears), so they decided that groundhogs would work just as well. We agree!

Over the years, Americans have adopted this weather tradition with the furry little burrowing groundhogs. It’s seen a surge of popularity in recent years due to the 1993 movie “Groundhog Day” (which is always fun to watch during this holiday–over and over and over (and over) again).

So, is Phil the Groundhog right about whether spring is around the corner? …Unfortunately not. He’s only right around 40% of the time. But there’s nothing wrong with the snow or the sun, and Phil’s trying his best. This holiday is also just in jest, but that doesn’t mean we can’t have fun!

Check out our main Groundhog Day activity page, with more than 50 crafts, worksheets, and printable books!

There you’ll find our Pop-Up Groundhog Puppet, Groundhog Mask, and many more!

Examples of our short printable books are:

For coloring worksheets, you can check out, for example:

You’ll also find many other Groundhog Day worksheets, including:

Or you can try out our Groundhog Day writing and math worksheets. Here’s a sampling:

Finally, you can learn more about groundhogs! We have everything from a Groundhog Quiz and a Hibernating Animals Information and Coloring Pages section to How to Write an Animal Report.

Happy Groundhog Day! And enjoy the warm spring weather, whenever it finally comes!