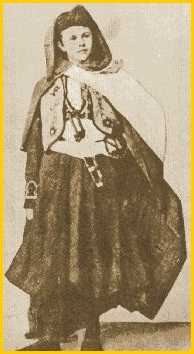 Eberhardt was born in Geneva, Switzerland, to an aristocratic Lutheran German mother and a Russian father who was a political activist, ex-priest, and convert to Islam. Isabelle was well-educated, including becoming fluent in Arabic and many other languages. She often dressed as a man in order to get along in the world (at the time, women were not allowed to many things, so dressing as a man overcame this societal obstacle).

She traveled to North Africa with her mother in May, 1897, and they both converted to Islam. Soon after, her mother died but Eberhardt remained in Africa, making northern Algeria her home and exploring the desert. Dressed as a man, calling herself Si Mahmoud Essadi, Eberhart traveled in Arabic society, including the secret Sufi brotherhood, Qadriya. She married Slimane Ehnni, an Algerian soldier, in 1901.