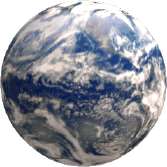 How Clouds Form: Clouds form when water vapor (water that has evaporated from the surface of the Earth) condenses (turns into liquid water or solid ice) onto microscopic dust particles (or other tiny particles) floating in the air. This condensation (cloud formation) happens when warm and cold air meet, when warm air rises up the side of a mountain and cools as it rises, and when warm air flows over a colder area, like a cool body of water. This occurs because cool air can hold less water vapor than warm air, and excess water condenses into either liquid or ice. For more on the water cycle, click here.

Nimbo
(meaning “rain”) as a prefix, or nimbus added as a suffix, in a cloud name indicates that the cloud can produce precipitation (rain, snow, or other forms of falling water).
Cumulo
(meaning “heap”) refers to piled-up clouds.
Strato
(meaning “layer”) refers to flat, wide, layered clouds.

Other types of clouds

Mammatus clouds
Dark clouds shaped like sagging pouches. These clouds often appear after a tornado.
Orographic clouds
Clouds that are formed as moist air rises over mountains or other major geographic features. The air floats up the side of the mountain and cools quickly, condensing and turning into a cloud.
Pileus cloud
A smooth cloud that is found over or on the top of a major geographic feature, like a mountain.
Contrail
(short for CONdensation TRAIL) is a cloud-like vapor trail that forms behind some aircraft when flying in cold, clear, humid air. The contrail forms from the water vapor contained in the jet’s engine exhaust.

The atmosphere lets some infrared radiation escape into space; some is reflected back to the planet. Clouds (together with the ice caps and particles in the air) reflect about 30 percent of the solar radiation that the Earth receives. The greenhouse effect traps the remaining heat in our atmosphere.

For more information on the greenhouse effect, click here.

The Earth’s atmosphere is a thin layer that surrounds the Earth. It composed of 78% nitrogen, 21% oxygen, 0.9% argon, 0.03% carbon dioxide, and trace amounts of other gases.

The atmosphere was formed by planetary degassing, a process in which gases like carbon dioxide, water vapor, sulphur dioxide and nitrogen were released from the interior of the Earth from volcanoes and other processes. Life forms on Earth have modified the composition of the atmosphere since their evolution.

Label the cloud types in this printable worksheet.

Label the types of clouds in this simple worksheet!

Label the water cycle in this printable worksheet.

Clouds Acrostic Poem - Write a poem about clouds. Start each line with a letter from the word ‘cloud.’

Clouds: Shape Poem - Printable Worksheet. Write a poem about clouds inside the picture.

Adjectives Describing A Clouds - Printable Worksheet. Write adjectives describing the clouds in and around the clouds. An adjective is a word that describes, identifies, modifies, or quantifies something (a noun or a pronoun). In the phrase, the black cat, the word black is an adjective because it describes the cat.

Clouds: Fact or Opinion?, A Worksheet

Clouds: Fact or Opinion? Blank, A Worksheet. Color the clouds and write 5 facts and 5 opinions about clouds. A fact is something that is true and is supported by evidence. An opinion is something you believe or feel to be true and is open to debate.