We love Halloween at Enchanted Learning!

And I’m particularly keen on pumpkin spice and spooky stories. How can anyone resist?

It should be no surprise that we were interested in how Jack-o’-Lanterns came to be. A Jack-o’-Lantern is a common thing to make and display for Halloween. It’s a pumpkin with a carved face (funny or spooky!), and with a glowing candle inside.

What is the origin of the jack-o’-lantern? In Britain in the 1600s, ‘Jack’ was a common name and ‘Jack-of-the-Lantern’ meant the night watchman (perhaps inspired by an Irish legend called ‘Stingy Jack’). Later on, British folklore and fairy tales (particularly in Ireland and Scotland) told stories like that of the will-o’-the-wisp. These were little fairies made of light who lured people into dangerous bogs or water (they’re seen in Pixar’s “Brave” and in J.K. Rowling’s adaptation of ‘hinkypunks’ in “Harry Potter”). A harmless Jack-o’-Lantern could easily be confused for the untrustworthy fairies, so it was a toss-up if following the light would lead you to safety or doom. Over time these stories would mesh, until they became the modern-day emblems of Halloween.

Yet, Jack the carved vegetable is much older than this! Thousands of years ago, Celtic cultures in what are now the British Isles had a very particular way of commemorating warfare: they’d carve faces into root vegetables and gourds. Well, archeologists think so — it’s extremely hard to trace history back that far.

The idea of Halloween originated as ‘Samhain’ in the 5th century BC. Samhain was a Celtic festival that lasted from late on October 31 to November 1. Samhain was believed to be a time when the worlds of the living and of the afterlife converged. On this one day a year, the Celts thought that ghosts and spirits could return to Earth. This day also marks the Fall’s harvest giving way to Winter’s snow (a good analogy to life and death).

Many cultures across the world have had similar holidays. A notable one is Mexico’s Day of the Dead, where from November 1 to November 2, families remember and honor their loved ones who have passed away. The Day of the Dead is a time for celebration! Samhain was a bit different and had more of a scary feeling to it. The Celts were nervous about these spirits and began traditions to chase them away. These ranged from carving jack-o’-lanterns to wearing masks and costumes. Jack-o’-Lanterns also provided light in the cold Autumn nights.

The year 1820 saw old Jack become popular in America, as Washington Irving’s “The Legend of Sleepy Hollow” featured a Headless Horseman who held his Jack-o’-Lantern head in his hand. Poor Jack was a villain in this, which is very different from “Jack the watchman.” But it was the scary portrayal that caught on with Halloween. Also important is that pumpkins are far more common in the United States than in Britain. So Jack-o’-Lanterns firmly became pumpkins, as seen in Irving’s classic tale.

But never fear Jack! Jack-o’-Lanterns have become the smiling face of modern Halloween.

Selected other Halloween crafts and activities

Day of the Dead crafts and activities 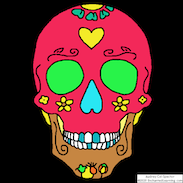 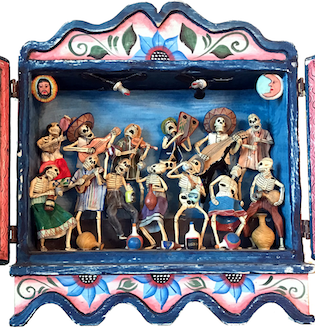 Have a very spooky and fun holiday!