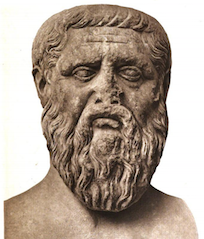 Plato (428? BC-347 BC) was an influential teacher, philosopher, and writer in ancient Greece. His ideas underlie much of Western thought. Plato’s theories, along with those of his mentor Socrates and his student Aristotle, made up the basis of Athenian philosophy. Plato founded the Academy, a highly acclaimed school and center of learning in Athens that became a model for future universities. Perhaps more than anything else, he dwelled on human nature and how individuals and governments could become more virtuous.

Plato may have originally been named Aristocles, after his grandfather. He came from a wealthy and powerful background—both of his parents (Ariston and Perictione) were aristocrats. But few details are known about his life, and much of what is known is from his philosophical writings. Even his birth year is debated; most historians place it in the range 428-423 BC.

Plato, as a young man, crossed paths with the renowned philosopher Socrates. Inspired by Socrates, Plato studied with him and became his protégé and confidant. Socrates’ philosophy of questioning the world around him was dubiously received. Encouraging youth to question everything and everyone (including their respected elders) was so controversial that Socrates was eventually put on trial, partly for this. But Plato was greatly impressed; so close was this mentorship that Socrates’ theories would later be passed down mainly through Plato’s recounting.

A major impact on Plato was the Peloponnesian War (431-404 BC), as he fought for Athens from 409 to 404 BC. The war ended in the Athenians’ defeat by Sparta. Due to this, Athens’ famous democratic system was temporarily transformed into a repressive oligarchy, disillusioning Plato of politics. It only returned to democracy after the overthrow of the Thirty Tyrants reign. Yet Socrates’ trial and execution in 399 BC (mainly on the basis of his philosophies, as described earlier) was what truly distanced Plato from Athenian government. In fact, it outright distanced him from Greece itself, as he spent 399-387 BC traveling through southern Europe and northern Africa (in such places as Megara, Egypt, and Syracuse). Plato spent these tours learning about a variety of topics while writing. This period is viewed as the early portion of Plato’s work. It is also sometimes called the Socratic Dialogues period, with Plato frequently illustrating Socrates’ questioning method of breaking down and reconstructing ideas. This period of writing lasted from 399 to 387 BC and famously included his Apology of Socrates. Though it is uncertain exactly which works he wrote at the time, they tended to be chronicles about Socrates and the older philosopher’s theories. These might have also included the books Euthyphro, Hippias, Ion, Major and Minor, and Protagoras.

Returning to Greece from his travels, Plato continued to write while he also revolutionized teaching. Founding the Academy in 385 BC, Plato reimagined the very concept of a school in a grand project on the outskirts of Athens. Students flocked there from around Europe. A cornerstone of knowledge, it provided such a high level of education in such a wide range of topics that it became a guide for future institutions. Many view it as Europe’s or, perhaps, the world’s first university. One of its most famous students was Aristotle (who began studying there in the 360s BC). A major turning point was the institution’s focus on mathematics, something that had previously been overlooked in education. Plato also felt that the Academy had the potential to make intellectual thought change government in a positive way.

The years from 387 to 361 BC comprised Plato’s philosophically focused middle period of writing. This saw him drift from Socrates’ ideas to formulating his own, and included his works Phaedo, Symposium, and, critically, The Republic. The last is one of Plato’s most famous writings and dwelled on what makes a virtuous person and government, all by envisioning a utopic scenario. His conclusion was, in short, that an ‘ideal State’ would be one run by philosophers (a philosopher-king). In essence, he sought to uncover the ‘ideal world’ and then to transform the ‘ordinary’ into this mightier concept. The Republic is also notable for its inclusion of Plato’s well-known Allegory of the Cave. This story contains the ‘character’ Socrates, the narrator of the main tale. This tale depicts an imaginary group chained to and facing a cave’s wall–a position that they’d been in for all their lives. All they could see of the outer, true world were the shadows on the wall. But these shadows were all they’d ever known. Plato (or ‘Socrates’) then made the analogy that a philosopher was similar to the one person who escaped the shackles and realized that the shadows were nothing compared to the beauty and complexity of the world beyond the cave.

Writings aside, Plato would later briefly move from Athens to privately tutor Syracuse’s (Sicily’s) leader, Dionysius II, in 367 BC. But the latter was violently suspicious of Plato. So in 365 BC the philosopher made his way back to the Academy to teach and write. Plato remained there until his death in 347 BC. In this late period, his writings were even more entrenched in metaphysical ideas (having drifted even farther from Socrates). These included Sophist, Timaeus, and Philebus. He examined morality and artistry in his Theory of Forms.

Aristotle was considered to be Plato’s natural successor to run the Academy, but was ultimately passed over. In return, he began the Lyceum, his own school. The Academy itself was shut down in AD 529, many centuries after its founding, when the Roman Emperor Justinian I felt that it promoted paganism over Christianity. But Plato’s legacy by no means ended then. His 36 written dialogues, including his ideas on mathematics, virtue, and metaphysics, are still widely read, reverberating to the present day. His recounting and elaboration of the Socratic method, his influential Republic and other dialogues, and even his invention of the university characterize Plato’s pioneering approach to philosophical inquiry, which has formed the basis of the Western philosophical tradition ever since.