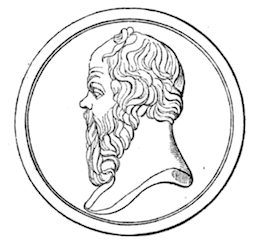 Socrates (470-399 BC) was a hugely influential philosopher of ancient Greece. This foundational figure in Western thought is most famous for his “Socratic method.” Perhaps his greatest legacy, this method is to engage in dialogue and continually ask pointed questions to gradually get closer to the truth. But Socrates maintained that though he asked many questions, he did not have the answers: “I neither know nor think that I know” (Plato, Apology, 21d). He always admitted his ignorance, even while investigating philosophical problems. He rarely arrived at definite answers to the questions he posed, but through his Socratic method he was able to get a deeper understanding of the questions themselves by figuring out what kind of answers were appropriate, ruling out certain answers as contradictory, and seeing that other answers had potential for further inquiry. Socrates engaged in dialogue with the people of Athens, but he is not known to have ever written down any of his conversations; what we know of him and his philosophical method was written and preserved by his followers and observers.

The little we know of Socrates was chronicled by other Athenians, primarily Aristophanes, Xenophon, and—most importantly—Plato. Born in Athens in 469 or 470 BC, Socrates was uneducated and came from a humble background. But he was eager to learn: At around 450 BC, when he was a young man, he sought to meet visiting philosophers, including Parmenides and Zeno of Elea. (Because of Socrates’ immense influence, we now consider these thinkers as being among the ‘pre-Socratic’ philosophers!) Some sources state that Socrates was a mason before becoming a philosopher and teacher. In any case, he became a celebrated soldier, fighting for Athens against Sparta in the Peloponnesian War, which raged between 431 and 404 BC. In 406 BC, he may have also belonged to the boule, part of the citizen government of Athens.

It was only later in life that Socrates focused on philosophy. Socrates’ wife Xanthippe was said to not be thrilled about this new profession. Philosophy, which to Socrates meant spending one’s days talking to people about ideas, paid nothing and, on top of that, he was reportedly so obsessed with his work that he was a less-than-attentive parent.

But it should be remembered that since all we know about Socrates comes from a scarce few sources that are mostly intended to be dialogues in his style, these scraps about his life are likely a mixture of fact and legend.

Most of our knowledge of Socrates’ philosophy comes from the written works of Plato. Plato was a follower of Socrates and wrote many philosophical dialogues in which Socrates was a major character, conversing with other people about philosophical issues. In these dialogues, Plato writes Socrates as advocating a number of philosophical positions, and we do not know with certainty which ones Socrates would actually have endorsed. But it is likely safe to say that according to Socrates, happiness and fulfillment come from developing knowledge and understanding. Most importantly, one should work to understand oneself. To do this, Socrates engaged in the practice of continually questioning everything. We now call this the Socratic method. Rather than lecture people about his own theories, Socrates would ask them questions to get them to come up with their own answers. Then, he would ask more questions about those answers. Sometimes this process involved breaking up a complex problem into smaller, more manageable questions to work out, and sometimes it involved getting people to recognize contradictions, hidden biases, and unjustified assumptions. Socrates is generally thought to have spent his time simply walking around Athens and talking to practically anyone willing to give him the time of day!

In Plato’s dialogues, Socrates mostly investigates the nature of knowledge and virtue. For example, he asks what it takes to know something; he asks what justice is; he asks if virtue can be taught. Usually, he and the people he talks to do not come up with clear answers to these questions. But this does not bother him because he seems to be trying most of all to show people that they do not know as much as they think they know.

Socrates used his conversations to show that other people lacked the knowledge they claimed to have, and he was always clear that he did not have this knowledge either. With his claimed ignorance combined with his magnificent skill in reasoning and speaking, Socrates became popular with many Athenian youths. They enjoyed watching Socrates question their elders, proving them to be more ignorant than they were willing to admit. No one seemed able to escape his scrutiny.

Example of a Socratic-style dialogue

Here’s an example of how one of Socrates’ conversations might have gone if he had talked to a student in the modern world:

Student: This is so boring. School is pointless.

Socrates: Oh? Then why do you go?

Student: Because my parents make me go.

Socrates: Why do you think your parents do that?

Student: They want me to learn.

Socrates: Is that not important?

Student: I don’t see why it would be. I’d rather just play.

Socrates: What kind of games do you like to play?

Student: My friends and I play basketball!

Socrates: To play basketball well, you must know the rules, right?

Student: Yes, I suppose you do.

Socrates: And then you must know how to throw the ball with the right amount of power and in the right direction to land it in the net. Or am I wrong?

Socrates: But to know either the rules of the game or the skills to land the ball in the net requires you to learn those things. Or is learning not necessary for you to know something?

Student: You would have to learn them, I think.

Student: I did say that, but I guess I don’t think so anymore!

Through this method, Socrates coaxed others into arriving at answers themselves, forcing them to follow the logical reasoning and thus deeply understand why the conclusion made sense. Still, many of his ideas fell counter to contemporary mainstream Greek opinions. Socrates had many opponents who felt he was arrogant and condescending in the way that he challenged their principles, and especially in his many demonstrations that they did not know as much as they claimed to know. Eventually, this opposition grew to alarming heights.

Socrates’ philosophy revolved around questioning everything. So, while he frequently asserted that he loved his city and community, he felt that Athens could only be improved by questioning its politics and traditions. Unfortunately, what he viewed as constructive criticism many Athenians saw as grievous, almost traitorous insults. In 399 BC, he was put on trial for the “crimes” of not believing in the gods (though he actually did) and of corrupting the youth. Plato dramatized this trial in his dialogue Apology, in which Socrates defends himself against these charges. Socrates utilized his famous method, seeking to demonstrate that the charges were unfounded; he chose to not use the traditional Athenian rhetorical tricks such as bringing his wife and children to beg the jury to spare him. After his defense, he was voted guilty by a small margin.

Socrates had the chance to request exile rather than execution, but he bluntly stated that rather than being punished, he ought to be paid and honored for his service to Athens. The court didn’t see the humor in this. Rather than lightening his punishment, they sentenced him to death. His horrified friends offered to bribe his captors to free him (according to Plato’s dialogue Crito), but Socrates refused, arguing that he had freely chosen to live in Athens his whole life and thus had agreed to follow its laws and courts, even when they ruled against him. On the day of his execution, Socrates consoled his friends by arguing for the immortality of the soul (as dramatized by Plato in his dialogue Phaedo). He was then given a cup of poison, traditionally described as being made from a hemlock plant, and Plato writes that he drank it without hesitation, unafraid of death.

As far as we know, Socrates never wrote anything, so his ideas and influence survive only in the works of those followers of his who were so inspired by him as to record his philosophical method in writing. Foremost among these writers was Plato (428?-347 BC), the famed philosopher who, in turn, would be the teacher of the equally pivotal Aristotle (384-322 BC). Many of Plato’s early writings specifically focus on Socrates and his method, giving his mentor a voice that has shaped Western philosophy for the last two thousand years.

In fact, Socrates’ philosophical innovations are considered the foundation of Western philosophy, and the philosophers that came before him are now called ‘pre-Socratic’ philosophers because of the recognition that Socrates changed the style and method of philosophy so dramatically. Often admired as the archetypal philosopher and thinker, Socrates remains one of the most influential figures of all time.